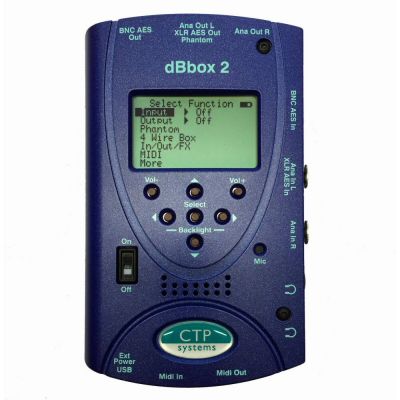 The dBbox3 allows monitoring, metering and generation of analogue, AES/EBU and SPDIF audio from a pocket sized box.

The dBbox3 includes a simple five key menu interface to make any test as simple as possible.

Monitor AES/EBU balanced or unbalanced inputs at 48kHz, 96kHz and many other sample rates using the built in speaker or headphones. Meter using -18dBFS, -20dBFS, PPM or VU scale with stereo phase meter.

Generate steady tone, tone sweep, GLITS, EBU, left only, right only, on both analogue and AES/EBU outputs at 48kHz or 96kHz. Tone frequency may be adjusted in third octave steps. Adjust Tone level from +10 to -60dBu in 1dB steps.

Use the built in microphone to talk to analogue or AES/EBU outputs.

Generate pink or white noise and send to left/right/both outputs in both analogue and AES/EBU with a choice of levels in 1dB steps from +10dBu to -60dBu.

Send an external mic to analogue and AES outputs with gain adjust and phantom power.

Read longitudinal timecode at 24,25,29.97 and 30fps with level metering, monitoring, freeze and feedthrough.

Generate longitudinal test timecode at 24,25,29.97 and 30fps with set time and start/stop.

dBbox2 MIDI transmitter with a choice of note, channel and velocity, note on and note off.

Use the dBbox2 as an analogue to digital or a digital to analogue converter with adjustable gain in 1dB steps, a limiter and HF, LF and Mid range equalisation.

Four wire box using the built in microphone and speaker or headphones.

Intelligent power control to extend battery life. The dBbox2 automatically switches off all electronics not required for the current task. A dynamic battery level indicator shows if you have enough battery power for a selected function.

Want an estimate on your delivery costs?

Buying with us is safe & secure

Buying with us is safe and secure, using trusted payment options

Need help with your order?